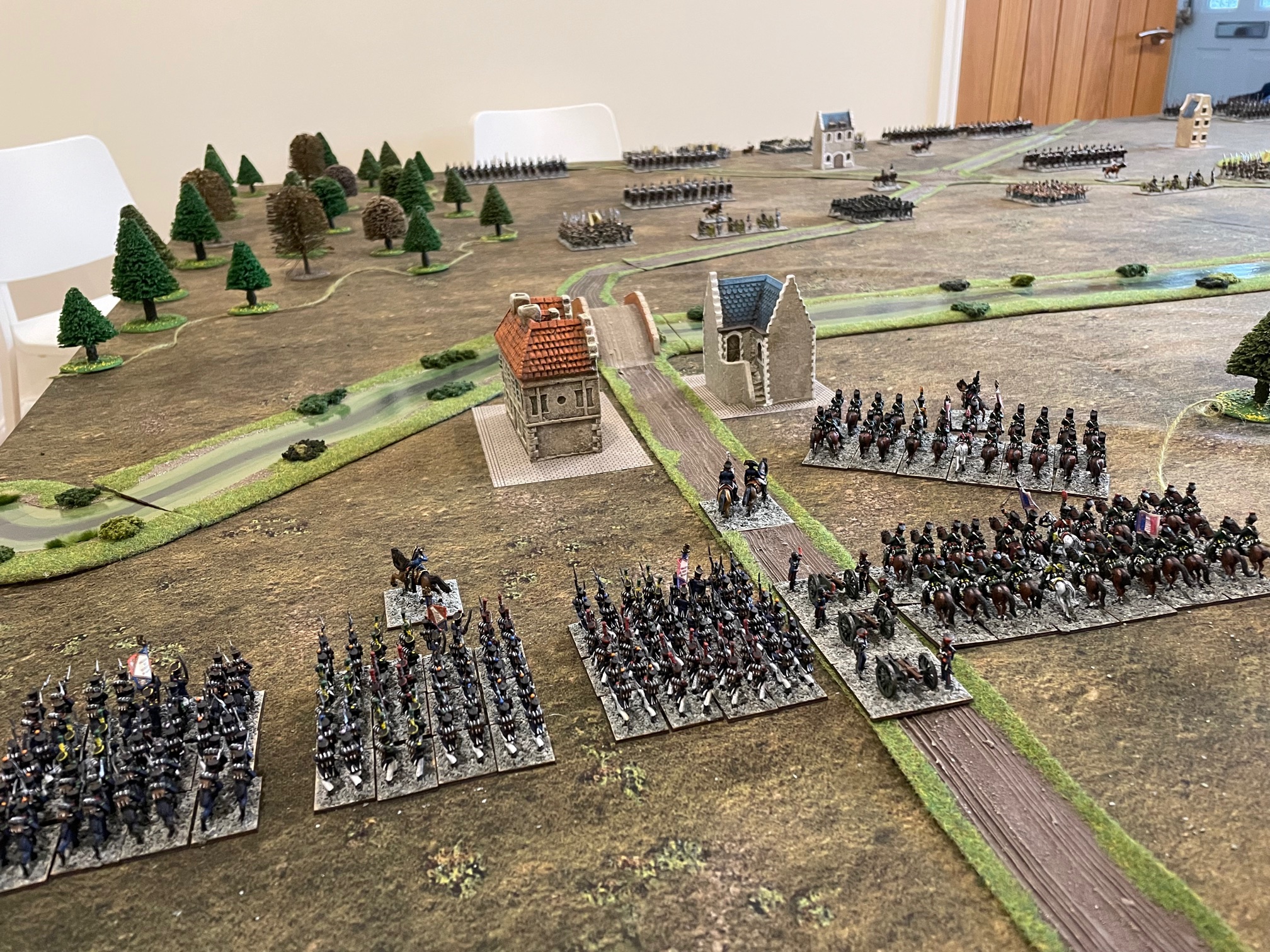 This weekend we fought a 15mm Napoleonic battle using Rank & File, partly because we hadn’t had the Napoleonic figures out in an age and partly to test some of the new rules for 2nd Rank & File.

Using 15mm for Rank & File we still kept to all of the same ranges, distances and rules but has two of the 15mm figure bases representing a single R&F base except for artillery where we kept 1:1. As all of the rules use the number of bases to calculate firing, break points, melee and so on it was an easy conversion to make and the game played much the same as it would in 28mm.

The first photos show the battlefield and the units available to both sides, though these turn up at various points during the battle. As umpire I knew when and where they would come on but the players didn’t.

The battle itself starts at midday with the French crossing in two grouping at a river and a ford. The Austrian Avante-Garde division is seriously outnumbered and needs to hold on long enough for their reinforcements to arrive on the field. As more Austrians arrived the battle swung with the French actually pushed back to the stream before their Dragoon division arrived on table.

What followed was a messy cavalry action with both sides throwing in more and more troops until finally the French forced the stream again, the weight of their dragoons along with the supporting infantry and artillery being too much for the Austrian cavalry.

In the meantime some much needed Austrian line infantry arrived along with a Russian cavalry brigade. Unfortunately two regiments of these were Cossacks but surprisingly they managed to pass their Elan tests and actually make a charge! Even so their main contribution was to increase the Austrian army break point.

Both sides continued to fight each other to a bloody standstill until we called it a draw as darkness was falling.

I think I’d be quite happy using 15mm figures for Rank & File again in the future but my plan is still to paint up a brigade or so of French so we can do some more 28mm Napoleonic games next year. 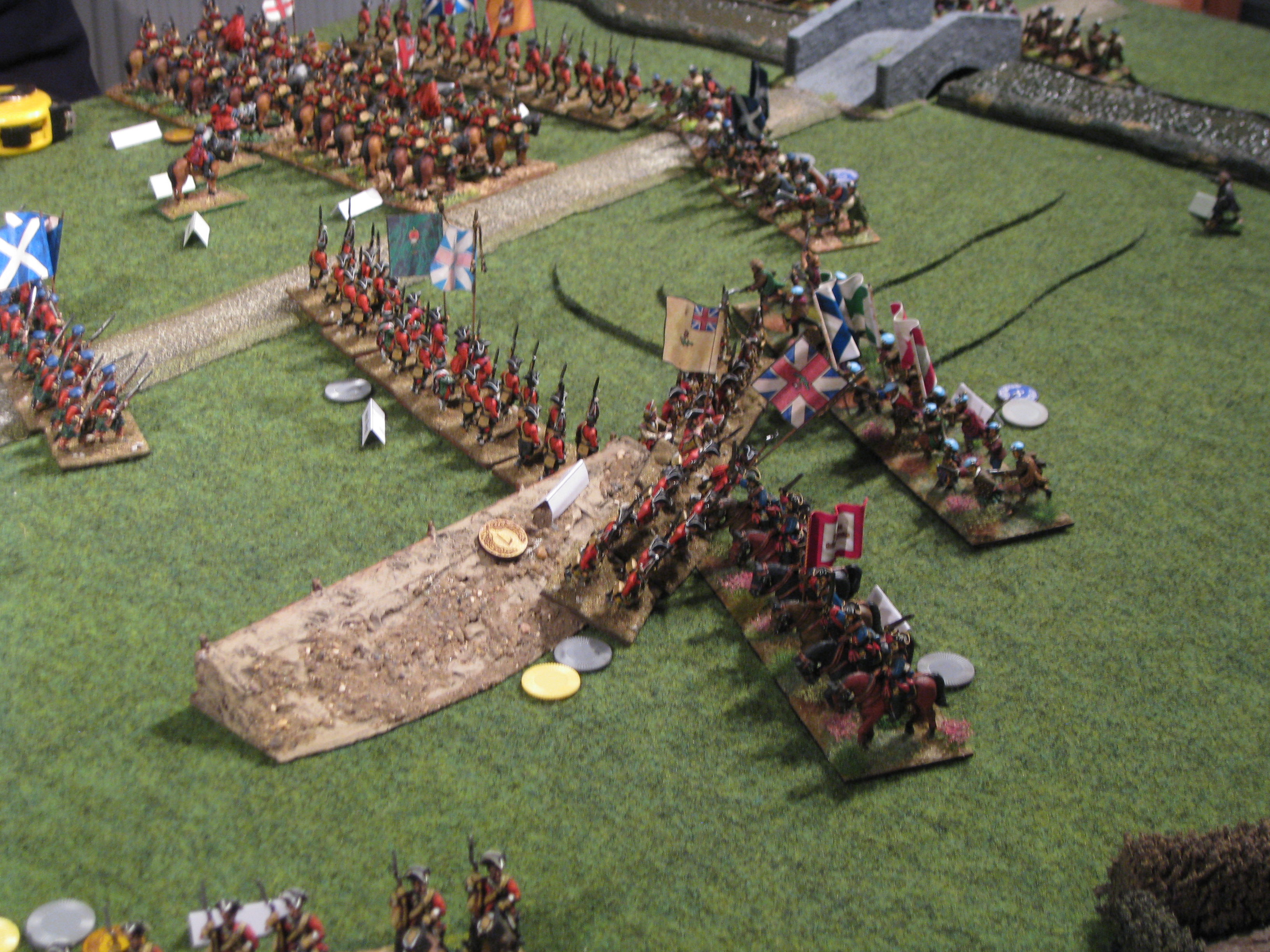 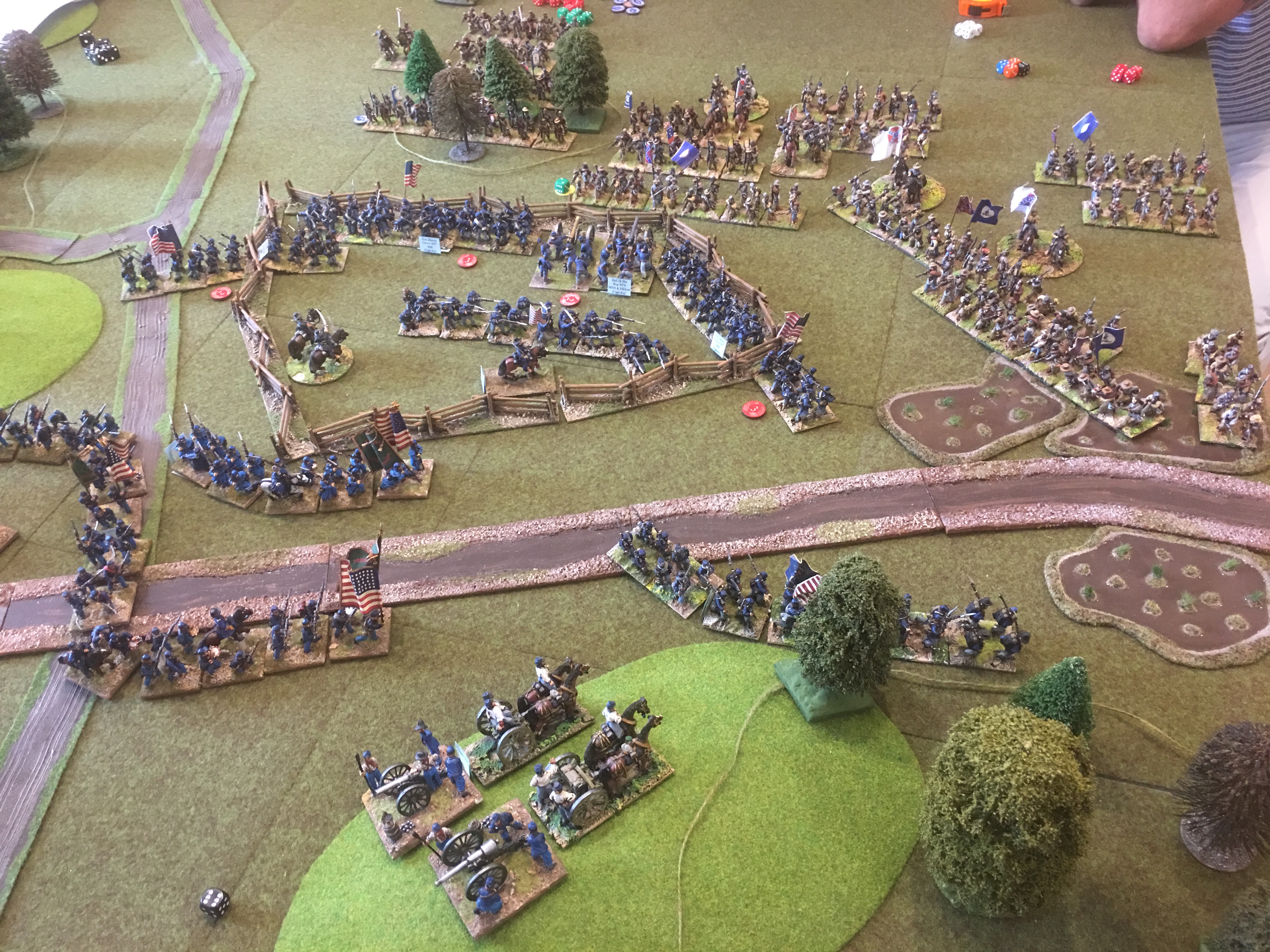 Our club puts on a game at the excellent WMMS show every year, in 2020 it was a Rank & File ACW battle ‘Fort Donelson’. We played this out twice, once as a test and then for real at the show. I designed the scenario to be a fairly even fight but I think with hindsight the victory conditions for the CSA are a little too hard. A closely fought battle even so.

The first public ‘outing’ for the Rank and File rules was a game that the Stafford Club put on at the WMMS show.

As usual we left things to the last minute and knocked something up on the spur of the moment – the result was our SYW refight of Kunersdorf using 28mm figs and the Rank & File rules.

Above is a shot of the entire 6 foot by 8 foot table – the Prussians advancing from the left of the picture with Austrian and Russian positions on the right – on a hill – behind earthworks.

The Prussian certainly had their work cut out and in between shopping breaks, coffee breaks, lunch breaks and chatting to people we hadn’t seen in ages breaks they began their attack.

The daunting task ahead of the Prussians – two lines of Austrian infantry behind earthworks, supported by artillery and cavalry on their flank.

Throughout the day the Prussians sensibly refused to attack this head on – instead relying on the right wing beating the Russians and rolling up this lot from the flank.

Unfortunately the Russian position was hardly going to be that much easier to take. This piece of ground saw the most vicious fighting of the day.

The Russians intent on holding at all costs and the Prussians knowing that if they couldn’t take the redoubt their whole attack would fail.

The Russian defenders were bombarded to little effect before the Prussian Fusiliers were thrown in against the redoubt. The first wave suffered badly and was thrown back, the second fared no better but the third managed to break through and a vicious melee ensued with both sides throwing in pretty much every spare unit they could get hold of.

The cavalry fight on the Prussian right lacked any sort of finesse. The redoubt and the marsh meant that all either side could do was pile forward with their heavies and hope to smash the enemy with superior quality, numbers and a fair bit of luck.

Once again I have left the battle report far too long to do it justice but at the days end the Prussians were forced to concede defeat with the Allied forces battered but still in control of the field.